Earlier this year, Simon Linford asked if Charlie was the youngest ringer to complete their Learning the Ropes Level 5. In fact we had three young achievers complete the scheme all at the same time. Here are their stories.

Charlie has progressed quickly through the latter stages of Learn the Ropes, with the biggest constraint to getting her LtR Level 5 being able to organise quarter peals fast enough. Charlie gets plenty of ringing opportunities, with the Birmingham School of Bell Ringing, Brumdingers, and ringing with parents and grandparents, although we don't push her particularly – if she doesn't want to go ringing ring she doesn't.

It is clearly a benefit having ringing parents although we didn't let Charlie start until we thought she was strong enough. We decided that starting a couple of years later and developing a strong style would be better for her. Her favourite ringing of the week is definitely with the Brumdingers, where being good at crowd control is as valuable a skill as being an ART qualified instructor!

Charlie was actually taught to handle at the School by Tony Daw. She progressed through the School just like anyone else, experiencing her dad's teaching for parts of her progress. Sometimes we think it is best for mum to stand behind and explain things, but we take it in turns to be shouted at. Family handbell sessions usually finish with someone storming out!

When I learned to ring, I never had any ambition to teach anyone else. I think all the kids I learned with viewed teaching as something adults do. Charlie wants to learn to teach as soon as she is old enough to – a combination of already being a helper at the School but seeing how ART can teach you how to do it.

On April 27th Harry Helyer rang the treble to a quarter peal of Cambridge Surprise Minor and so completed all the activities for his LtR Level 5. This was achieved 16 months after his first lesson and three weeks after his 11th birthday. He rather over-achieved, in that he also rang a quarter peal of Grandsire Doubles in the same evening, thereby qualifying for Level 5 in both the ‘Doubles’ and ‘Minor’ routes.

It was a good day for Harry, since earlier in the day he had led a team to victory in the local branch striking competition (call change section) where he put in the calls in an expert fashion. He is mad keen on anything to do with bells and his parents have had to adjust to the constant sound of bells in the house, as he practises whenever he gets the chance – on the piano or simulator.

Harry came to us through an enquiry to ART from his Dad, who wanted to find out if his bell-mad son could learn to ring. I was the nearest qualified ART teacher and they have both been loyal members of Northallerton band ever since, despite living over 20 miles away.

The attached photo shows Harry with certificate and the completed LtR Progress logbook. He has already ticked off a first peal and quarters of Plain Bob Royal and Grandsire Triples for his LtR Plus.

When asked what he likes about ringing, Harry simply replied: “everything!” He just loves to ring bells and doesn’t mind whether it is rounds to help somebody less experienced, or the challenge of the next new method.

I also asked about his ambitions and he said he wants to get his own handbells and mini-ring and be Tower Captain at Northallerton. These may all be plans for the future, but his other ambition “to ring a quarter peal of Surprise Major” may not be so far off.

In 1970 when I learnt to ring at Thorne, South Yorkshire I met a lovely dedicated ringer named John Laughton from Sprotbrough, married to Barbara with a little boy Simon. Barbara gave birth to a baby girl Jane who learnt to ring at the age of 12. Jane grew up & married Shaun, due to have a baby when sadly they lost John to cancer. The following January, Jane gave birth to a baby boy Noah.

Little Noah spent the next twelve years visiting the tower and asked if he could learn to ring.

I was given the great honour of teaching Noah to handle a bell and as I had heard great things about the Learning the Ropes scheme through ART, I decided for a youngster he would love the certificates and workbooks.

Noah started with three handling sessions a week and very quickly was ringing rounds, learning changes and conducting.Noah had a natural aptitude for ringing and learning. Noah was checking his books every week and asking what he could do next. Planning everything together kept me on my toes. Using the ART scheme was a massive help with organising what was needed plus getting a team together to support Noah.

In eighteen months Noah had passed all five LtR Levels plus the extra routes for Levels 4 and 5 which he insisted he completed so he had ticked everything in the Personal Progress Logbook.

Noah has rung twenty quarter peals from Doubles to Caters, has earned a Gold Plus Certificate in the 50 Ringing Things challenged, joined the Yorkshire Association and become a member of the Yorkshire Tykes coming third overall in the RWNYC at Liverpool. Noah appeared with the Sprotbrough/Doncaster team for Armistice on the BBC inside out television programmes and received an one of his Learning the Ropes certificate from veteran Ben Parkinson.

Noah is working towards his D of E using bell ringing as a skill and is now learning Surprise Major. Noah is a very dedicated, organised and efficient ringer at our church, supporting other local churches and our local society.

Teaching Noah has been a huge pleasure and a great honour in memory of his grandad John who we believe is watching over him. 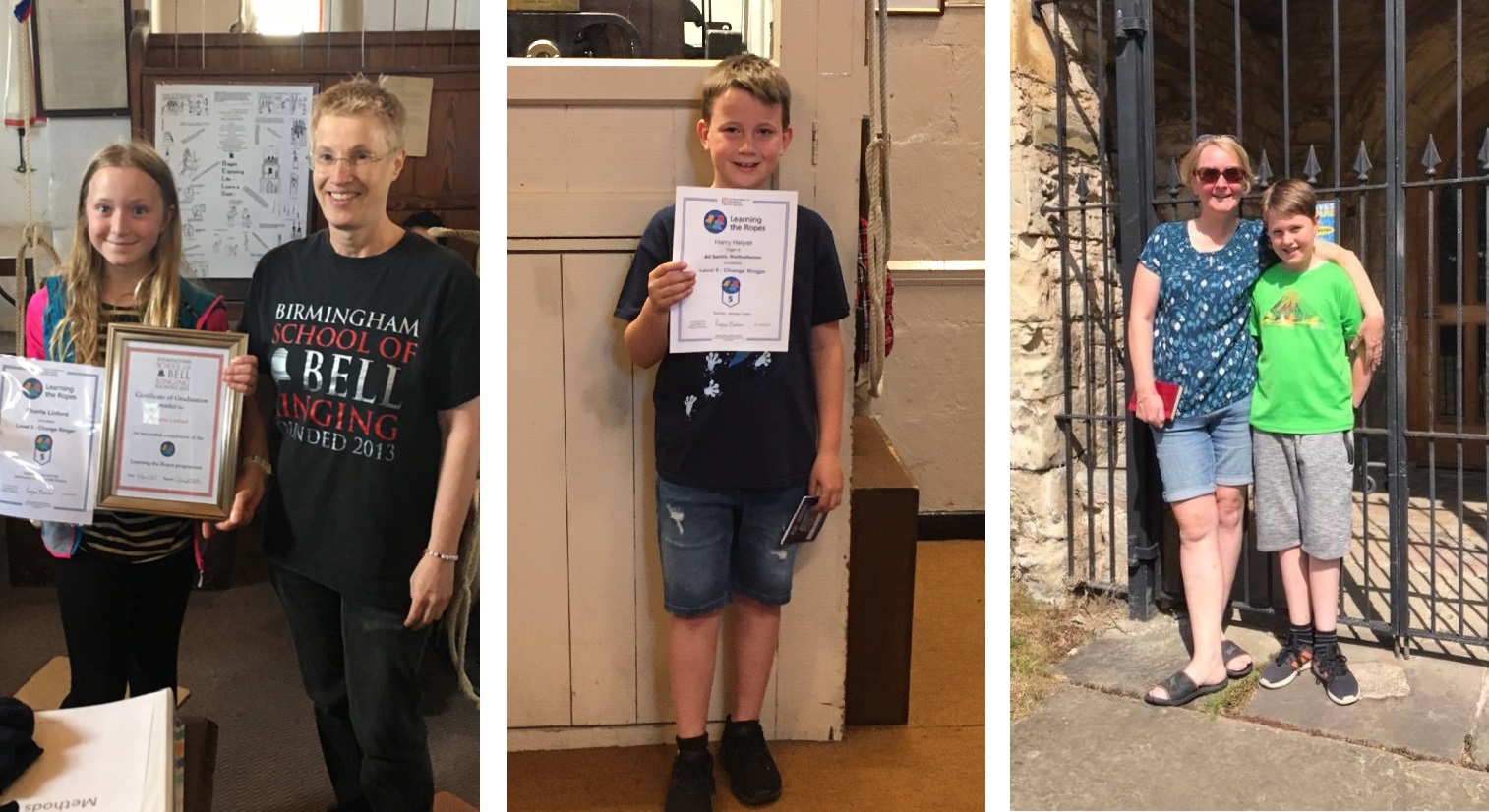