Ding is a virtual ringing platform written originally by David Norman and subsequently developed by his fellow Trowbridge ringer Giles Wood. It is an alternative to Ringing Room. In both, you ring online with other people, but Ding also allows you to ring with 'Bob', the automaton who can ring as many bells as you like.

Bob enables you to practise a method on your own, and he can also fill in for you on a practice night, ringing as many bells as you need. You are never one short for Stedman Doubles, or even eleven short for Orion Maximus!

Let’s start by understanding why you’d want to use Ding as a learning or teaching aid.

Ding as a learning aid

Learners are able to learn more easily about method ringing when uninhibited by their ability to control their bell. Ringers can be taught to watch for their course and after bells before ringing, and can practise it with Bob in place to provide each learner with reliable bells to course.

The real-world ringing environment encourages learners to look at the bell that they are following. Call changes reinforces this approach, until the learner has acquired just about enough bell control to learn to plain hunt by numbers. In contrast, Ding encourages you to listen and count your place. When you learn to plain hunt, it is not an issue if the other bells are coming at you in different orders, and it is not much of a step from hunting to doubles to move up to minor and beyond.

Of course, the learner still needs to acquire ropesight on returning to the tower; but they now do this with a much better understanding of ringing. Viewing options with moving ropes gives your learner a chance to acquire some initial ropesight.

Bob waits for you to ring before continuing. For learners, this is highly beneficial. In the real world, it can all go too fast, and as a learner, by the time you realise you are looking at the wrong bell it is much too late, the change is messed up and you are struggling to find your place again.

Bob gives you the chance to realise that it is your turn, and to carry on unimpeded by your earlier mistakes. It also allows you to practise at a slower pace initially.

With the prospect of Ding offering 3D virtual reality in the future, it will become possible to put in hours of practice ringing in a realistic virtual environment, both with Bob and with other people, some of whom might also be using dumbbells.

In Ding you are not limited by the number and ability of the ringers present, because you can use 'Bob' to ring all the other bells.

Whilst you can get to Ringing Room simply by logging on to a web site, Ding is an app that must be downloaded and installed before use, adding a layer of complexity.

Ding Unity runs on Windows, Mac, Linux, and Android, and has the potential to run on iPads and iPhones. The default layout has the bells represented by boxes containing the numbers of the bells, laid out as on a piano keyboard with the treble on the right, with a letter showing you which key to press to ring your bell. Like the ropes in the tower, the numbers go up and down, but they stay in the same places – this is not an online version of Diagrams!

To use Ding you choose the tower that you want to join from the list of available towers; if your tower isn't on the list yet then you create one. The first person to go there becomes the Conductor, and from that point onwards only the Conductor can change the band. The conductor can be changed at any time.

The default view is two rows of boxes, with numbers in the lower row. Above one of the numbers is an 'H' (for handstroke), telling you that this is your bell and you can ring it by pressing the H key.

When you do so, your bell number moves up to the top row, like the sally going up in the air, and there is now a 'B' (for backstroke) telling you that you can ring your backstroke by pressing the B key.

Other ways of ringing the bells are available, including one designed for mobile phones.

It’s best to start by ringing rounds. It may take a moment to get used to ringing electronically if you haven't done it before. Those who consider themselves dinosaurs when it comes to technology may benefit from looking away from the screen initially, instead listening and counting, pressing their key at the appropriate time – One­-Two-­Press-Four-­Five-­Six.

Ding has the ability to view moving ropes, which provides a learning aid for acquiring ropesight. The bells are arranged clockwise, with the treble on the left, so this viewpoint looks more like that of someone watching the front six from the other side of the room than that of someone actually ringing. There are options for linear layouts and for a full circle as if you were ringing the bell.

Whilst Ringing Room shows you a circle as if viewed from above, Ding shows a three­-dimensional view. Each rope is successively higher than the one before, so that the tenor’s sally is noticeably higher than the treble’s, to help to identify which bell is which.

By default, the full circle layout presents a view from behind the treble. However, you can choose the viewpoint from a different bell. The circle layout is nice to watch as though you are standing behind a bell. You could set your computer to full circle mode while others are ringing, or you could set Bob to ring all of the bells.

Bob rings by waiting for you, so for example if he is expecting to ring after the third and fourth, he will wait forever for those two bells, even if every other bell has already rung.

If you want to ring with Bob then of course you need to tell him what to ring, and you do this using place notation.

As the conductor, the Ringing Page allows you to call Bobs and Singles. The call appears on other ringers’ screens. You can click the button at any point during the lead, Bob won’t get confused by an early or late call.

Ding was originally written for lockdown but has a use well beyond that. The most significant plans for Ding include:

Why not give Ding a go? More information and downloads are available from the Dinging website ­ www.dinging.co.uk

If you’re into social media why not join the Ding Facebook Group and you could join one of the practices located there ­ www.facebook.com/ groups/dinging/ 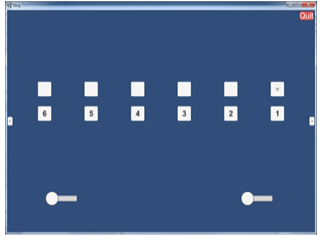 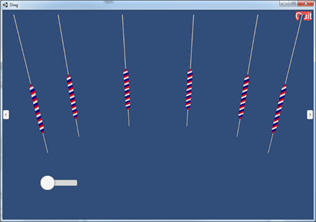