A recurring theme in the nominations for the Recruitment and Retention Award was Ringing Remembers. And what a year 2018 was for bell ringing, culminating in over 3000 ringing performances published on BellBoard marking the 100th Anniversary of the Armistice. Go back a year and the Ringing Remembers campaign to recruit 1400 ringers to honour those killed during the First World War was launched. It all happened very, very quickly with no time to prepare the ringing community or pull together a project team. Into the breach stepped Vicki Chapman who had the job of trying to coordinate The Big Ideas Company who mainly seemed to do very good things - when and where they liked. And also to sell Ringing Remembers to a ringing community who could be very vocal about what they didn’t like!

With a winning combination of reliance and perseverance Vicki and the Ringing Remembers team smashed the recruitment target and 2,800 Ringing Remember’s recruits said they would be ringing on the big day. So I’d like to say a big thank you to the members of that team, many of whom are here today – Tim Hine, David Smith and Alison Everett who were there at the start, Vicki who very quickly took the lead, Andrew Hall database supremo and Eileen and Bruce Butler in the States who worked so hard to find ringing teachers for those who signed up to learn to ring on the Ringing Remembers website.

As a token of our appreciation, ART would like to present Vicki with a personal award for making all this happen.

Thank you Vicki and thank you Ecclesiastical Insurance for sponsoring this award. 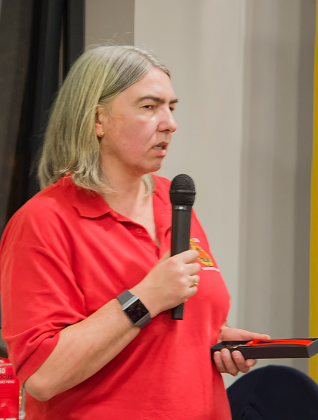 Lesley Belcher takes over the reins at ART