Why do ringers lapse?

Between March and May this year, Alison Smedley carried out a piece of research as part of her BA course at Anglia Ruskin University. Alison liaised with the Association of Ringing Teachers (ART) to draft and promote her questionnaire.

As ringers know, learning to ring bells hung for change ringing is a time consuming process, both for the learner and the teacher, with usually weekly sessions over several months to learn to handle, before the new ringer can start to learn basic change ringing and join in with the rest of the band. ART estimates that it will take most people an average of 2½ years to become a competent change ringer (defined as Learning the Ropes Level 5 which requires them to ring at least six quarter peals including Plain Bob Minor inside). People giving up, at any stage (whether soon after learning or after a number of years advancing into method ringing) represent an overall loss to the Exercise.

The survey, aimed at lapsed or returned ringers, was launched in March 2019 through social media posts and ran until mid April 2019. It featured in ART’s newsletter and an article appeared in the Ringing World of 29th March; 316 responses were received. There were 10 questions, aimed at finding out why and when in their ringing career the ringer stopped, and whether they had restarted, or what could persuade them to do so.Question 1. How old were you when you leant to ring?

A significant majority of respondents first learnt to ring when they were under 18 (64%). Only 12% were still under 18 when they gave up. Most respondents (39%) gave up between the ages of 22 and 40. Over half (51%) of those respondents who have returned to ringing started again between 41 and 59, with another 20% starting again after the age of 60, suggesting that this is something that people do come back to later in life after the time constraints of careers and family life have been alleviated.

Question 2. Have you lapsed and then returned to ringing?

This was a yes/no question about whether or not the respondent was currently a ringer, bearing in mind that all respondents should have lapsed at some point even if they had restarted again. 47.40% were not currently ringing and 52.60% had lapsed in the past but were ringing again.

Question 3. How many years did you ring for?

As identified in Question 2, 162 of the respondents have returned to ringing. 133 people (of the 146 respondents who are currently not ringing) answered the question about how many years they had spent as ringers. Collectively they represent over 1600 years of ringing between them – an average of over 12 years per person of ringing experience. More significantly, 75 of these 133 respondents have over 5 years’ experience, with 35 individual lapsed ringers each having over 30 years’ experience. This represents a significant loss to the Exercise, and is a potential source of instant ringers if just some of them (and others like them who didn’t respond to this survey) can be persuaded to return.

Question 4. Whereabouts did you ring?

Nearly half (48%) of the respondents learnt to ring at a village tower, with 35% learning in a town and 17% in a city. By the time they lapsed, the results were more even, with villages and towns receiving 38% and 37% of the responses, and 25% ringing in cities. Answers to this question confirmed that the survey had a good geographical spread of responses.

Question 5. Did you know any ringers at your tower before you started ringing?

The answers question 5 demonstrates that the overwhelming majority of ringers (65%) knew another ringer well before they started to learn.

Question 6. Are you male or female?

Question 7. What stage did you get to? 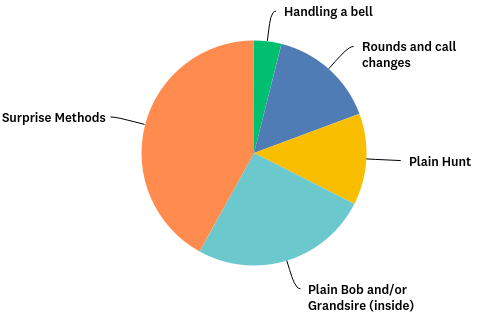 Less than 4% of respondents gave up while still learning to handle a bell. Of the four other stages used to categorise different learning phases of ringing for the purposes of this question, the number of responses increased with the level of complexity, with the most surprising finding being that 42% of respondents were able to ring Surprise methods by the time they gave up ringing.

Question 8. What was it about ringing that you enjoyed the most?

From these results it is clear that the social side of ringing is by far the most important with 80% of respondents choosing “social enjoyment and making friends” and 65% for “being part of a team” (respondents were able to choose more than one reason). This is backed up by previous ART research (ART, 2017).

One comment in particular summed up their enjoyment of bellringing as a unique activity as “The ‘neatness’ factor – very ‘English’ for someone from Canada to do.
I just always thought it was a good kind of quaint. Also it was cool learning rope handling techniques and simple movements.”

Question 9. Why did you stop ringing?

There was no one clear reason why people gave up, with all the suggested answers – moved away, work, illness, started a family, problems with teacher or band, lack of progress and got bored – receiving similar numbers of responses, with illness receiving the least at 11% and moving away the most at 32%. A free text box asked for other reasons and the overwhelming reason stated was ‘lack of time’ (24 comments). Only one respondent remarked ‘just couldn’t get it’.

Of the open replies, three arising issues can be drawn out:

• Comments on teaching included both those who felt that teaching was too structured and those who would like it to be more structured than it is (in their specific tower). One respondent said “Learning for leisure suddenly became very pressed with tests, targets and certificates everywhere – I just wanted to learn to ring, and have fun.”

• Individual personality clashes and whole bands or groups appearing to have formed a clique accounted for 17 comments collectively.

Question 10. If you haven't already taken up ringing again, what would encourage you or assist you to start again?

Of all respondents, 35 felt that nothing would encourage them back, or they didn’t know what would, whereas 19 respondents had already started again – some gave reasons why which are included in the answers below, but others did not. An analysis of the 166 responses (206 specific reasons) puts them into the following broad categories:

The largest number of responses referred to “having more time” and to “different teaching methods”, with 25 responses each. Personal reasons about which little can be done by ringing societies or ART such as health improvements and relocating to a new area received 11 and 16 responses respectively. A better standard of ringing, easier bells and daytime practises accounted for 12 comments. 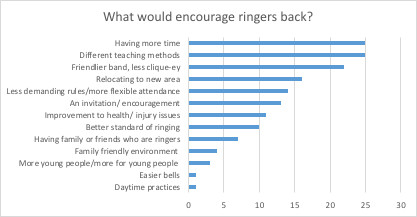 Four respondents wanted to see a more family-friendly environment, and three young ringers said that more young people taking part along with social activities not just about ringing would encourage them back.

A friendlier band was the next most important reason that people would consider returning, with 22 comments. 14 respondents felt that less demanding rules and more flexible attendance structure would allow them to return, while 13 felt that they just needed a prod in the form of an invitation or some encouragement to come back.

“If someone from the tower had stayed in touch, I would deffo have started again sooner rather than leave a 17 year gap.”

Alison made several proposals based on the responses including a campaign to encourage lapsed ringers with their wealth of experience back to towers, utilising personal contacts that already exist, with the promotion of this survey through social media having demonstrated that many former ringers are still in contact with existing ringers.

The evidence from the survey that a more flexible approach – where some ringers are not required to attend one particular tower at specific times – might also be explored and possibly some guilds or associations might trial a flexible membership scheme as a positive way of involving those who can’t make weekly commitments.

Two areas that were featured in responses which would require careful handling are whether ringers just need to be nicer to each other and avoid forming cliques, and managing teaching methods to be as inclusive as possible. A small number of comments specifically related to bullying, and a more open approach should be adopted by associations to encourage whistleblowing through the proper channels and processes already in place. In terms of teaching, a multi-style approach should be available at all towers rather than an expectation that all learners should sign up to a formal learning process. Equally, associations or guilds could support local towers that currently don’t participate in any formal learning process so that their learners do not miss out on the formal process if they want it.

The results of the research and Alison’s proposals are currently being reviewed by ART, consulting with the Ringing World and the Central Council. 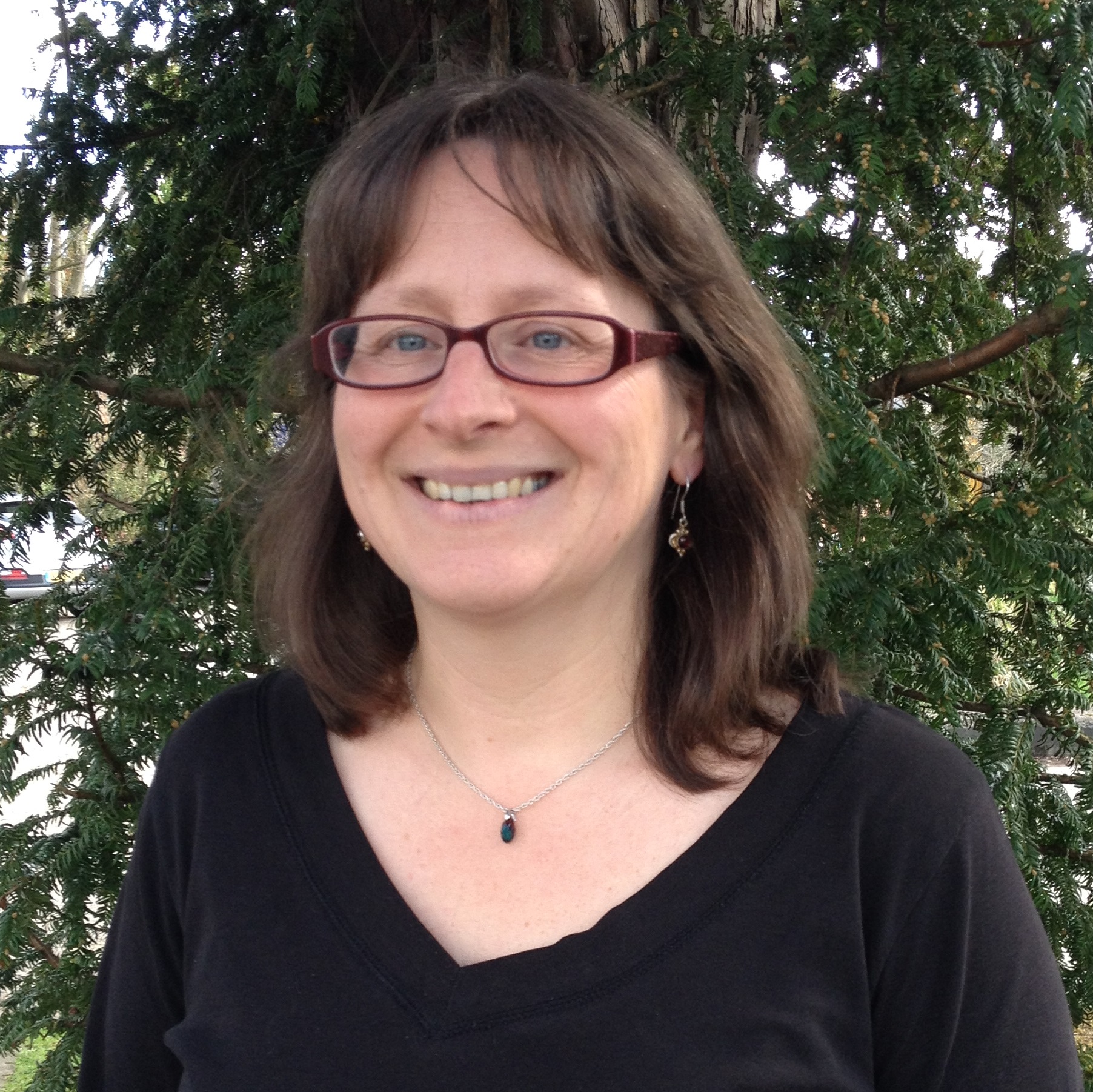 Alison comes from an extended ringing family, having been taught as a child by her father, David Struckett, and rang at Old Windsor and Winkfield in Berkshire while growing up. 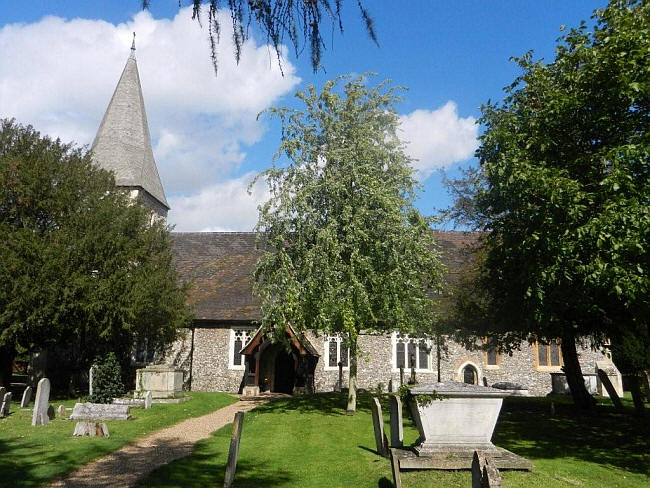 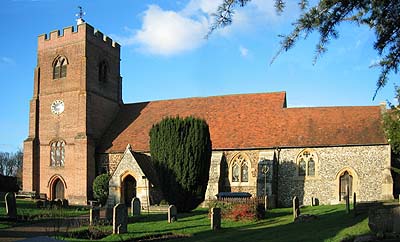 On leaving home she was part of the Inveraray band for six months before returning south and ringing in various Middlesex towers before meeting and marrying Rupert (who started learning to ring the weekend they got engaged!). They rang at Greenwich for a number of years before moving to Staffordshire nearly twenty years ago. Their teenage son, Peter, has also started to ring. Alison currently describes herself as an occasional ringer (rather than a completely lapsed one).

To read the full report by Alison Smedley please follow the link below:

'Why do ringers lapse?'

Tower Talk - the newsletter by ringers, for ringers