How do you teach someone to ring? The process or ringing becomes so natural and ingrained in many of us that it seems difficult to remember what it was like trying to learn what is, after all, quite a complicated feat of co-ordination. If called upon to teach someone, many of us I imagine will try and cast our mind back to how we learnt: vague recollections of learning one stroke at a time and then putting it together but it’s a picture that lacks detail and often confidence.

With the stand to be held at the Bedford River Festival in July, complete with mini-ring, we are hoping to gain some new recruits to ringing but recruitment drives need strong teaching skills afterwards to retain those recruits. Teaching at present can vary so much from one tower to another as each teacher develops their own styles and strategies, often in complete isolation.

So, on 1 March 2014, early on a sunny Saturday morning, a group of ringers met at St Andrews, Bedford to be taught how to teach in a more structured way. This was Module 1 of the Integrated Teacher Training Scheme (ITTS) run by the Association of Ringing Teachers (ART). Geoff Horritt of Royston was our Tutor for a full day of training on bell handling.

After initial introductions and a few slides to set the scene it was up into the bell tower to put the tied bells to good use. The bells at St Andrews are rather light (5-2-22 ring of 8) and can be a little flighty but Geoff had soon demonstrated that almost all problems on the bells are handler generated. I for one seemed to spend as much time in the first session learning very useful tips about how to ring on light bells and long drafts as I did about teaching.

Any original fears that the day may be largely theoretical were soon dispatched as Geoff set about demonstrating how the two ringing strokes can be broken down into various exercises to focus in individual elements, and then let us loose to try them on each other. This allows learners to get to grips with the whole action but break it back down and focus back on specific areas of weakness – much more effective than telling someone to concentrate on a particular problem when they are already busy trying to ring generally.

Every exercise was designed to help one element in building up an accurate ringing technique but some of the exercises posed quite a challenge for the already experienced ringers attending the Day Course! There’s nothing like trying to teach bell handling to show up any weaknesses of your own ringing but then a Teacher should be able to demonstrate good technique (even if they don’t always practice it in their general ringing).

By lunch time everyone was buoyed up from trying their hand at various exercises, both as learner and instructor in small groups, when we adjourned to a nearby pub for lunch.

After lunch it was onwards and upwards (and downwards) as we changed focus to how to teach raising and lowering. One again this was broken down into stages with various exercises suggested and duly attempted by the course delegates. It also emphasised how raising and lowering is a part of the overall ringing package and can help strengthen parts of the normal ringing technique rather than just being a separate discipline.

The day ended with a round up, a few more slides focussing on identifying and curing common handling problems and some practice at observation so that we are sharp-eyed to identify where the training needs to be directed. This led to a certain amount of paranoia about our own ringing styles as we ended the day but we left feeling inspired and recognising that developing a good technique is an ongoing process that can carry on long after basic bell-handling is mastered. The exercises we covered were not meant to be exhaustive but they challenged us to look at teaching in a different way and be flexible in our approach to the individual elements that make up good bell-handling.

Our thanks go to Geoff Horritt for leading the Day Course and to Bob Jones and Alex Nash for organising the facilities. For anyone interested in learning more about teaching ringing I would heartily recommend it.

But of course, the process does not end there. To gain registration as an accredited ringing teacher the process for the delegates was only just beginning. Time now to put theory into practice! 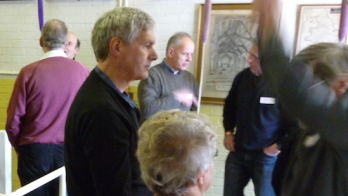