There is currently a lot of breast beating about the future of ringing, the ageing population of ringers and the difficulty of recruiting young people. I have been aware of localised pockets of success reversing this decline as witness the number of teams entering the Ringing World National Youth Contest and the Birmingham teaching programme. I have also been well aware that the Association of Ringing Teachers has been addressing this nationally by detailed analysis of best practice in physical and mental learning and promulgating the best practices.

As a Tower Captain where the number and capability of the band has been reducing over many years, I urgently need to recruit, to teach and to retain ringers. Before I recruit it seems a good idea to consider how to give the most effective instruction and best subsequent experience to the recruits so my wife, who will be helping in this, attended this course with me.

Fifteen of us, mainly from the Somerset area, gathered in the (very cold!) refreshment area of SS Peter and Paul’s church to meet our tutor, Graham Nabb, and his assistant and commissariat manager Jill Hansford and to enjoy coffee and biscuits (later a more than sufficient sandwich lunch and afternoon tea and cakes).

Graham delivered the course with the excellence and fluency of the experienced tutor he is, changing the pace, giving individual and group attention, answering questions and maintaining our interest levels with humour and extensive knowledge through the whole seven hours.

The course, developed now over several years, is very comprehensive and covers everything from the first impressions a new recruit will receive (many wry smiles at Graham’s description of the typical unwelcoming ringing chamber), what people expect nowadays when trying a new pursuit, general teaching good practices and techniques and the application of them to ringing, recruitment, and dealing with handling problems in a mixture of theory and practical sessions.

I suspect I was not alone in being embarrassed by some of the poor handling habits I have adopted , and, as someone who has taught new recruits over the years, how threadbare and unprofessional have been my efforts. I have often complained at the difficulty of teaching the older people who have been the only source of our recruits in recent years. I was left wondering if I was too old to learn all the techniques we were offered. The main problem with the course, as I see it, is just how much it seeks to cover in the day; it really is very intensive. This is recognised by ART and does reflect the difficulty in getting learners and instructors together; we were repeatedly reminded that we would need to go away and practise what we had been taught.

I apologise to my fellow course members for not having had time at the end to seek their views for this report but I gathered that they were very appreciative of the course. I was discouraged by the overall high age of the attenders and the fact that some of them had only been ringing for a very few years (one of them, a Bob Doubles ringer, stated he was the most advanced ringer in his tower) but encouraged that they were prepared to learn and go back to teach at what might without their efforts become silent towers.

Our thanks go to Graham, to Jill and to David Purnell for the use of the well-equipped and welcoming tower. 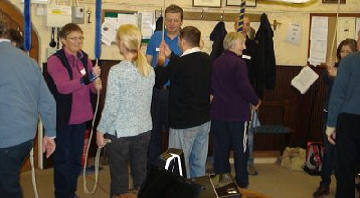