Ten of us (assorted into self-assigned categories of teacher, mentor or observer), met at Ranmoor Church in Sheffield for an interesting and thought-provoking ITTS Module 1 Day Course with our ITTS Tutor Neil Donovan.

The Day Course was structured into three theory and three practical sessions spaced throughout the day.

Theory sessions touched on various aspects of general teaching principles informed by evidence-based research, such as reinforcement of good practice – (practice makes permanent, only perfect practice makes perfect), learning styles (visual, auditory and kinesthetic – learning by doing), errorless learning, differences between adult and child learners etc. As a person interested in ideas and academic theories in general, I would have relished more of a theoretical slant, but the literature that came with the course (supplied in an attractive folder to each student) offered pointers as to where we could find out more, especially through access to the ‘Association of Ringing Teachers’ website.

Practical sessions covered teaching hand and back stroke, putting both strokes together, ringing up and down and solving common handling problems. For this we were divided into small groups that worked together throughout the day, whilst Neil ‘circulated’ around the groups offering suggestions and insights.

We were ‘officially’ meant to use role-play to practice teaching and learner roles. Our group soon abandoned the role-play idea as we found it much less useful than simply discussing and trying out the various teaching ideas that had been raised, bouncing ideas off each other and trying to work out the subtle variations in exactly how we each did various skills such as making coils and ensuring the hand grip on the rope ended up in the correct position on the sally and at backstroke. This was most interesting to me, firstly because I was unaware how my body automatically did some of these actions until we had ‘deconstructed’ them – I felt I needed to know what I was actually doing in order to be in any position to attempt to teach these skills, secondly because it was fascinating to realise that the three highly experienced ringers in our group all had subtly different ways of doing basic skills. One of the nice things about the ITTS scheme is that it is not ‘dogmatic’ but allows for different approaches to teaching between individuals, respecting teaching styles as well as learning styles.

I have never taught basic bell-handling, but having watched many teaching sessions by others (especially by my mentor Simon Reading) I felt I knew the basic principles. However the course did suggest several new ideas which I would consider using, such as the ‘hand ring’ exercise (to encourage correct arm movements), shadowing arm movements without touching the rope, assisted raising and lowering (where the tutor looks after the tail end whilst the learner concentrates on the sally and vice versa), plus other useful tips.

Limitations of the course for me were mainly the fact that the ‘role-play’ method advocated didn’t suit my ‘learning style’, it was really hard verging on impossible to pretend to be a beginner when in the ‘learner’ role. It would be so much more informative to have a real beginner to work with, as one would then have proper feedback as to the efficacy of the various approaches. Also I felt as if the course had ‘dismantled’ my previous model of how I would go about teaching bell-handling to some extent, and I wasn’t ready to integrate all the new information into a new approach until I had reflected on it for a few days/weeks, so I wasn’t ‘ready’ to have a go at pretend teaching. Also as someone who has never liked ‘acting’, I found role-play rather embarrassing.

I was struck by the mentions in the theory sessions of needing to be a good motivator and a good communicator to be an effective teacher. I’m sure this is true but I’m not sure how you can acquire these traits if you don’t have them already. In this respect the course perhaps helps to highlight whether you have what it takes to become a teacher, rather than enabling you to become one if you don’t have these qualities.

Altogether it was a very interesting and useful experience in many ways.

I am very grateful to those who gave up their time to make it happen, particularly Neil, and the Ranmoor ringers – wonderful catering provided by Elaine and Jill. 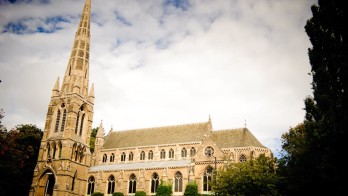