It was with an element of trepidation that my wife Jill and I set off to Meole Brace to attend an ART Module 1 'Teaching Bell Handling' day course. I had decided a few months ago that teaching was something I wanted to investigate as we only have one teacher (our Tower Captain) at our tower in Tilston, Cheshire and therefore I thought I could offer something to new ringers, even though I had only been ringing for 2 years (Jill has been ringing for nearly 20!). The question was: is two years enough or would I be so far behind everyone else in ability that I would just make a fool of myself?

My concerns were quickly abated when met by Paul and the old secondary school headmaster of our two children who is now Tower Captain at Meole Brace! I then realised that I had met Paul at the ART Conference in Royston where I was demonstrating and promoting my Simulator System so, now there were a few familiar faces, everything was looking good for the day.

The training was split into “classroom” and practical sessions, with plenty of opportunity to try out on the (very light) bells of Meole Brace which was a great facility with a large and open ringing chamber, although at times you were a bit shoulder to shoulder with people on each of the tied bells.

Paul was excellent, ensuring that - as well as giving the ART content - he included real life experiences of those present. There were a lot of already very experienced teachers on the course which meant that there were rounded views of all the topics covered.

We took videos and critiqued our own handling performance (for those who wanted to take part) and even the very experienced were surprised how easy it was see where problems could occur with handling when a bit of video was added to the mix.

We all brought packed lunches and the sandwiches and goodies were accompanied by stories of “impossible” towers, awkward bells and peals of both the successful, unsuccessful and laughter types!

All in all, we came away with a feeling that we had some great ideas and confidence that we can make a start on teaching the basics of bell handling and as a final footnote, I have my first test subject lined up to teach at our tower - just need to get the approval from the Tower Captain … 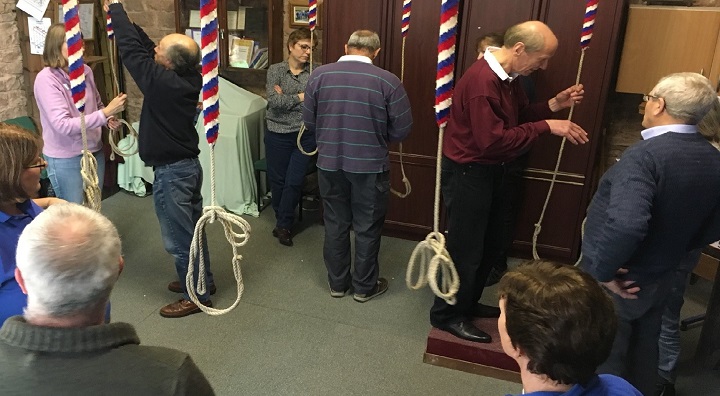