In March, Bradpole Ringing Centre in West Dorset was one of the latest venues in the Salisbury Guild to host an ITTS Module 1 Day Course.

Frank Seabright, a Member of Association of Ringing Teachers who had made the long journey from his home in Ledbury, Herefordshire, led the full–day course and was warmly welcomed by Guild Training Officer, David Hacker.

A group of 15 representing various towers from around the district assembled for coffee and the chance to get to know each other prior to the initial introduction and presentation.

Throughout the day all aspects both theoretical and practical were dealt with in detail; the former topics included basic components, joining strokes together, ringing up and down, solving handling problems, all with the aid of projector and screen, whilst the simulator provided the practical side. Day Course packs were handed to each person together with a questionnaire with headings ‘visual, auditory and kinaesthetic’ to ascertain which was the most preferred style of learning.

Lunch prepared and served at the Centre by some of the local committee provided a welcome break, and those responsible for the catering are to be warmly thanked.

Before departing, David gave a sincere vote of thanks to Frank for his expert presentation and advice, and warm applause followed.

The day had been a long one and in fact over-ran the expected time of closure, but the day had provoked much interest and provided space for questions and comments, and overall it seemed that all aspects of the day had been well covered and received. Folk departed with some enthusiasm and encouragement, carrying with them hopes of forwarding the good work in and around their respective towers.

All in all, an extremely well spent day for those who were able to attend, and further such ITTS Day Courses are already being considered. 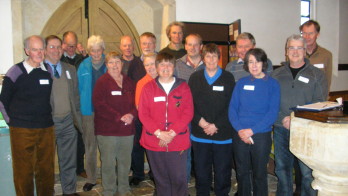