The idea of our team taking part in ITTS was prompted by our pressing need to recruit and retain new ringers – a familiar story with many towers. Although over the years, we had taught several people to ring, none of us were trained in teaching and were just doing our best to pass on our skills out of necessity. Some of us felt nervous about teaching a totally new recruit and although we had an idea in our heads of what we needed to convey, we had no firm plan to follow with training.

It did take us a while to finally decide to undertake ITTS – was it right for us? Could we each commit to finding and training one new learner? Would we be up to teaching or would our own handling faults and failings get passed on to others? Would one ringer who rings by pitch and rhythm with no ropesight at all ever be able to teach anyone else who was more visually inclined?

After much debate amongst ourselves, on Friday the 28th of June, Graham Nabb from the Association of Ringing Teachers came to present our Day Course for ITTS Module 1 and by the end of the day, we were all extremely glad that we made the decision to go ahead with the training.

We discovered that by breaking down the skills involved in handling a bell into smaller, more manageable chunks, learners can find it far easier to absorb and to develop good handling techniques – since bad habits developed at an early stage are far more difficult to undo. After some presentations downstairs in the Church, we headed up to the ringing room to try out some of these exercises and techniques on each other – each one taking turns to be a learner and then a teacher. It felt a little strange trying to instruct a ringer of 40 years experience in how to handle a rope, but as communication skills are vital in teaching, we were able to give each other constructive feedback about what had worked well in our teaching and what wasn’t quite clear in our explanations.

ITTS has made use of research by physiotherapists and sports scientists – it approaches ringing like any other activity, where a structured and gradual approach to training can work wonders. With simple exercises (often performed with the bell down), new learners can perfect the action of ringing beforehand, so that when they actually come on to ringing a bell for real, most of the techniques will be well practiced and already implanted in the muscle memory.

We were encouraged to think carefully about the words we routinely use when teaching in the tower – such as ‘hold’ (which can cause people to overly grip a rope), also words which might make a learner feel unnecessarily scared – a confident, relaxed approach is vital and will naturally instill more confidence in a new ringer.

Graham explained that people learn in many ways, with some taking a visual response (who like to be shown what to do and will later on easily learn method diagrams), some being naturally more kinesthetic (who prefer to physically do a task, respond to physical prompting and learn by doing) and more auditory based learners who respond well to detailed verbal explanations .

By the end of the day, our group had all learned an enormous amount and we now have the ongoing task of training ourselves to become teachers – initially by practicing on each other and local ringers to try and develop our observation and feedback skills – solving handling issues and helping ringers who wish to improve their technique. Once we have gained confidence at this and have tried out teaching these exercises, it’ll be time to go onto the exciting part of finding new learners to teach to Learning the Ropes Level 1 – where ringers will learn to handle a bell and after a few weeks ring rounds with the rest of the band – this will not only help more people to discover bell ringing with good technique from the outset, but we hope will also greatly help our team in enlarging our Sunday service band. 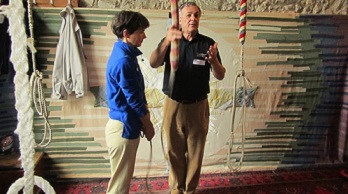