Back in the late 1940`s a young curate decided to create a teaching tower in Norwich. His name was Gilbert Thurlow and the bells were a derelict four at St.George Colegate. Whitechapel were commissioned to produce an easy going ring of six. He went on to restore the twelve at Great Yarmouth and finally Gloucester Cathedral. Colegate has been constantly in the foreground of teaching in Norfolk so it was in this tradition we held an M1 course at this venue.

There were sixteen pupils that did make it a bit cosy but we managed. Ringers came from across the county and one couple from Lincoln but the lion`s share came from St.Peter Mancroft. Work is due to start on the Heritage Centre in the New Year and this will include eight dumb-bells and associated software.

Graham Nabb tutored the course and Lesley Boyle was there as an observer.

I didn’t tell Graham but there were some sceptics among them but I`m pleased to say they were duly impressed! Everybody on the course is actively involved in teaching so we can expect a high percentage accreditation. Hopefully, this will encourage more to take up the course. Apologies for arranging it when Norwich City were playing at home, it made getting out of the city rather slow!

Next job is to find a venue for an M2 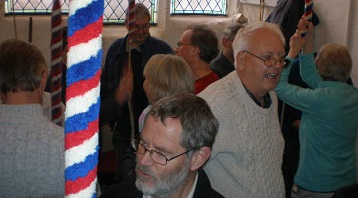