The first “in house” ITTS Module 1 Day Course was held at Penrith on Saturday 29th March. Many thanks are due to Chris de Cordova for all the work she put in to getting the Day Course up and running and to Neil Donovan for coming to deliver the Day Course to those attending.

Fortunately the ringing room at Penrith is large and it was very pleasing to see 21 potential Teachers and Mentors packing the space. Neil told us it was the biggest number he had seen at a Module 1 Day Course! Most people were from Cumbria, including Millom and Dent in the deep south, and two were from the North East. The previous experience of those attending covered the full range from those who had been ringing themselves for many years and had already taught many new ringers, to those who had themselves only been ringing a short time, or had never tried teaching a new learner.

The full day course began with Neil explaining how the ITTS Scheme works and how each teacher would be supported by a mentor who already had plenty of teaching experience. To successfully complete the Scheme each teacher would teach a new ringer from scratch whilst liaising with their mentor and eventually being observed by an independent mentor. This should have the benefit of introducing quite a lot of new recruits to ringing who will, we hope, want to stay!

The Day Course was divided between talks on theory, practical sessions and a convivial lunch at Foundry 34, where discussion continued. The theory sessions described the art of teaching in some detail and will have been useful for the many people who had never taught anything to anyone before. The practical sessions gave us all the opportunity to try “teaching” each other various parts of the bell handing motions. This was especially useful as it allowed the groups to discuss with each other various aspects of how to gently encourage a new learner towards successful bell handling. Those who had never tried helping a new learner were able to do it in the safe knowledge that their “pupil” was actually in control, which gave them confidence to try out different ways of keeping things safe. We would have liked longer at these practical sessions. After a theory session about common handling faults, it was fun to observe and criticise each other’s ringing and discuss what we could do to try and remedy the faults (it’s fair to say that lots of people had no faults but I was not in that number!)

When the day ended at after 5pm we all felt we had worked hard and benefitted from the course. There has been much written about ITTS, some of it full of praise and some less than complimentary. I support the Scheme because: 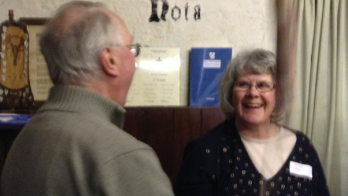