When we originally offered to run ART modules 1 and 2C immediately after the ANZAB festival in Hamilton, New Zealand, we thought it unlikely that there would be enough takers to reach a quorum. Hamilton has only one tower, making it impossible to hold the modules during the festival itself (which ran over a long weekend), and there's only one other tower (St Matthew-in-the-City, Auckland) within a hundred miles. Would anyone be able to take the necessary two days off work to attend, and to find enough energy and enthusiasm after a strenuous three days' ringing during the festival?

Happily though, there was enough interest to run M1 on the Tuesday after the festival and then M2C the next day. We were grateful to local expert ringers Frank and Mary Sluter, who had attended the ART modules at the previous ANZAB festival in Melbourne in 2018, for helping to swell the numbers during the practical sessions for module 2. This was particularly the case as the bells at St. Peter's Cathedral in Hamilton are a decent weight (a 20 cwt eight) and, with clappers immobilised and the simulator used to avoid complaints from the adjacent law courts, not that easy to set. Frank and Mary also provided food and drinks during the breaks – and all this after being heavily involved in running the ANZAB festival.

All went well, and ANZAB's usual habit of having more than one tutor running the courses meant a reduced work-load for the tutors, and more variety for the attendees. Corinne and David were particularly glad to have the assistance of Kathi Downs, a trainee tutor at the final stage of her apprenticeship. Everyone seemed to be very happy and pleased with the courses – the photo (right) captures the mood well!

The two days of courses ended memorably with a nearly-successful attempt to ring Dixon's as part of the 'unusual methods' practical; this is certainly unusual, and a challenge to any band, giving excellent if difficult practice at reacting quickly and keeping track of who is leading at all times. I don’t know any band that has brought it round at their first attempt!

Particular thanks to the cathedral staff who were friendly and helpful throughout the festival and the two days of ART modules. 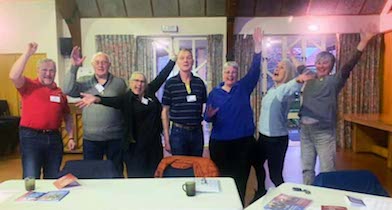