On Saturday 11th June, I attended a Module 2 course at St Peter & St Paul’s Church in Olney. Whilst driving over to Olney I was a little apprehensive as although I’ve been ringing for a number of years, I haven’t found learning to ring methods very easy, taking a long time to master and grasp a new method. However, I was confident that my bell handling would not let me down! As a young learner many years ago, my Grandad (as my then Tower Captain) taught me how to handle a bell with confidence.

On arrival at Olney, I was met by Lesley Belcher, who gave me a one of her big smiles which immediately put me at ease, she then told me that although I had asked to attend the course as an observer, she had actually put me down to do the full course! Thanks Lesley, you did the right thing as I didn’t have time to panic! I signed in and was given my course pack and then glanced up to see a few familiar faces from a nearby tower.

Our tutor Frank, welcomed us to the course and he gave a brief introduction of what we would be covering. Before I knew it we were then on our way up a very long flight of steps (which by the end of the day, I came to know very well indeed, beautiful view over the surrounding countryside, from one of the windows near the top!) Once in the ringing chamber, I glanced around, having only usually rung on six bells I quickly noticed that this tower had 10 bells, panic moment, how would I cope with 10 bells, but then the person next to me pointed out that we would only be using the front 6… phew! A call for six volunteers to ring the bells up, so in my usual confident way, I stand up and grab a rope, and off we went. My next first was that I had never rung in a tower with a simulator, this was good fun.

Once the bells were up, Frank began his teaching, we rang rounds, followed by some small exercises that involved certain bells being asked to turn round and face the wall whilst ringing so that you had to really listen to your bell and then we were put in groups of three and told to pass the rope to each other whilst maintaining the ringing. This was very useful and in my group of 3, Peter, Lawrence & myself handled this exercise very well. We also tried ringing using a Mexican Wave sequence where neighbouring bells change places for one whole pull, this was fun!

After this practical session we returned down the very long flight of steps for coffee which was then followed by a theory session, including things like running a good practice. Frank highlighted ways in which we could make our sessions more interesting and fun which in the long run would help us retain our new ringers. At 12 o’clock it was time to return to the bell chamber for another practical exercise, this time skill building for Plain Hunt. Frank mentioned different tips for helping the new ringer learn this skill, counting places and rope sight.

Next up was lunch, a lovely spread put on by the ladies of Olney church and much enjoyed by all of us hungry ringers who seemed to have worked up an appetite (must have been those steps!) During lunch we mingled and chatted to each other and then onto the next session, this time another practical session so yes, you guessed it, back up the long flight of steps! Easy steps to Bob Doubles, Frank introduced the ringing of either Bastow Little Court Doubles, Cloisters Doubles or Bayles Doubles prior to going into Bob Doubles. This was interesting and somewhat challenging at times but so worth learning and definitely good for helping a new ringer.

Next up another theory session “Running a Successful tower” Frank stressed that as Tower Captains we should plan our practice in advance, set goals for people, suggest what to learn next and what to learn in the future. He referred to a “Prime Ring” which is to make sure that all your ringers get a go at ringing something of their choice. Be a flexible teacher, maybe try taking your learners to a tower where there is a simulator, monitor your learners progress and give feedback, offer advice on how to improve, this in turn will help them to achieve. Above all be a good communicator, encourage and motivate them. At the end of the course Frank explained about SmART Ringer and that we would be emailed our passwords shortly.

I thoroughly enjoyed this course and feel that I will be able to pass on this knowledge to others in the towers that I ring at.

PS Just to let you know that last night at Lovell, Peter, myself and David G (who was acting tower captain for the evening) tried out Cloisters Doubles with all of us and we moved around the different bells. It was really useful and in particular one of our older ringers who has only been ringing for a few years, really enjoyed it. He has never rung inside to a method before, choosing instead to drum the tenor or ring the treble to plain hunt. He told me that it was the first time he had counted his places and also his first time for dodging! So I’m really pleased that we did it and I think everyone learnt something from it. 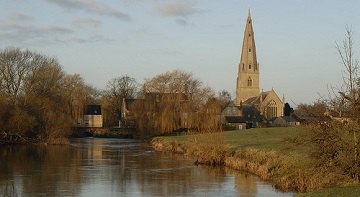