I recently completed the ITTS Module 2 Day Course with about 12 other ringers – some experienced teachers and others, like me, keen to learn a little more. The course was taken by Pip Penney whose energy and enthusiasm were infectious. Coming from a background of being a relatively experienced ringer in a tower of ‘plain hunt by the numbers’ ringers I had been briefed by my Tower Captain prior to coming on the course to “teach the tower plain bob doubles or grandsire”. Having no idea how to achieve this goal I really wanted to see what the ART had to offer and whether there would be anything in the course I could take away that would help me achieve this rather challenging goal. The answer was yes!

We started the day with mentors and teachers all together in the theory room at St Paul’s, Birmingham and talked briefly through the aims of the course, a few introductions and then got onto the meaty part of teaching handling and ringing including exercises that could be helpful in making that enormous leap into method ringing slightly smaller – how perfect! There were lots of practical suggestions and ideas for improving bell control and handling for learners – a huge bar to progress in many towers – which were interesting and different and would add a massive amount to an inexperienced ringer’s repertoire, many that could help ringers even without a band to which they could treble. What a revelation! Once the theory session was over we moved upstairs into the bell tower and had a lovely time trying some of the things we’d talked about. The most memorable moment for me was ringing Twinkle Twinkle Little Star alongside some very notable ringers – great fun!

After a yummy lunch provided by Chris Mills the afternoon followed a similar format, this time aimed at progressing ringers with a slightly higher skill level with more movement from the learner’s bell in the change etc.

Having returned to my home tower and spoken with my Tower Captain in order to complete the course I have been encouraged to run a small section of the practice armed with my new ideas to help the band in taking its next steps towards method ringing. Every band member spoke to me after the practice and said that they felt that the fresh perspective which came from the things that I had learnt on the course made for a really enjoyable half hour and many of them said that they were really pleased to be working on something new again – I’m really looking forward to trying out some new things next week. 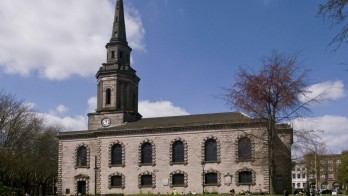