At 9.45 on a vaguely springlike morning, seventeen of us from all over Yorkshire and Lincolnshire assembled in the Bradford Ringing Centre, coffee in hand, under starter’s orders ready to be led through the potential minefield of learner development by our able Tutor, Neil Donovan.

Promptly at 10.00, the Chapter House, more used to witnessing the weighty matters of diocesan reform and archdeaconry finance, quickly became home to a lively assembly of ringing mentors and teachers, all keen to tackle the problem of learner retention once the first steps of handling have been accomplished. Theory and practical sessions followed in succession and we were quickly into trying out ideas to make learning FUN. Would we make fools of ourselves, we wondered? You bet! Kaleidoscope, “Twinkle, Twinkle”, Bastow, Cloister and even Bayle’s all had their moments, and the seven hours seemed to pass in no time before we were on our way home to pursue new ideas with our learners.

We all know that developing learners from basic handling into change ringing isn’t a new problem, one only has to read in Trollope‘s Grandsire that “the system (or want of system) of instruction generally used in the Ringing Exercise is thoroughly bad” to realise this. Many excellent training manuals have been written since Trollope’s day, so how does ITTS break new ground? For a start, it’s here and available. But who is making use of it? This Scheme had experience and enthusiasm in plenty, but to be honest, delegates were teachers who were already putting into practice much of the material without perhaps realising it, not above questioning what they do, and constantly seeking fresh ideas. Also, and this is important, they were blessed with a good number of recruits, for in this part of the world, at least, there seems to be something of a ringing renaissance and very few towers lack a band. It would be easy to say that the two are interlinked.

The ITTS is now coming out of the pioneering stage, in which many highly experienced and enthusiastic teachers have been gathered in. The big question remains, though: how can the inexperienced and unenthusiastic be motivated to take part, and relight the spark they may once have had? This must be down to the local association, guild or district. Dictation is out, captains have every right to go their own way, but every recruit lost is a recruit let down, and if ITTS can help prevent this in any way, the Exercise is on the right track and the associations have a big opportunity to help things along. The YACR does this, paying delegate fees. It’s not just the cash that matters, however, but the positive impression that is given of the Association’s support to the business of ringer recruitment and retention.

Special thanks go to Neil Donovan our Tutor who with boundless enthusiasm delivered this most interesting and focussed day. Also congratulations to Stuart Holtam for so ably organising the course and liaising with Cathedral staff who provided us with refreshments and the cloistered comforts of the Chapter House. 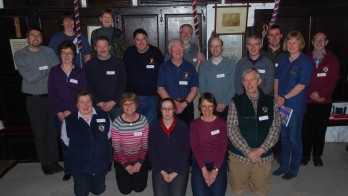