On Saturday 26 April, 16 of us arrived at All Saints church, Northampton to attend an ITTS Module 1 Day Course. There was one Tutor, Graham Nabb, three local helpers, two trainee mentors and nine trainee teachers. The trainees came from three different branches of the Peterborough Guild: Daventry branch, Northampton branch and Towcester branch. It’s good to see people coming along to find out for themselves what it’s all about, as the saying goes, don’t knock it until you’ve tried it!

The break times gave everyone a good opportunity to catch up on what they were already doing and talk about how they were finding the training:

“I love the techniques for teaching handstrokes, it takes the stress out of it!”

“It’s great, it almost like a philosophy of ringing.”

“I thought it was going to be a few hints and tips but it’s so much more than that, really informative and useful.”

Everyone ended the day feeling enthused to recruit some learners in order to try out their new teaching skills. So now the real work begins; to recruit learners; to practice techniques learned; to keep in touch and work as a team. Everyone worked really hard on the day and we have a follow up day planned already to bring along our new learners and work together to hone our skills. Thanks must go to Graham for running another great Module 1 day and also congratulations on reaching double figures in jam tart consumption! 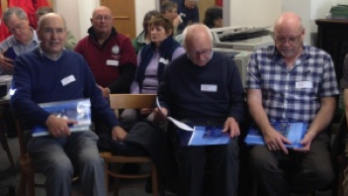