After a delay caused by snow last year, Module 1 of the ITTS was delivered at Oswestry on Saturday 29th March 2014. Paul Lewis was the tutor for this Day Course and there were six learner teachers, six mentors, and one observer present as the day got underway.

In a brief interlude before the Day Course got going properly, Richard Major asked the questions ‘How hard do you need to pull a bell rope’ and ‘How do you know if it is too hard or too soft?’ He described designing and implementing a strain gauge which he has attached to the rope of the 5th at Oswestry, and the first results of its use. A possible use for this piece of technology is to allow a student to compare his pull with that of an experienced tutor.

Paul gave a description of the ethos behind ITTS and described what the day’s course would include. He then went on to talk about the importance of intensive training. For example forty minutes a day for five consecutive days, rather than 10 minutes once a week, will lead to faster learning. Breaking down the whole action of bell-handling into several smaller parts, and the phrases used by ringing teachers were also discussed. An automatic (learned) action will not be forgotten but it will be difficult to change.

Up in the ringing room, the importance of health and safety was discussed including how to test that a bell is down. The use of the hand ring exercise was described and there was a demonstration of handling, with the teacher holding the coils of a down bell while the student pulled the sally and the teacher let out the coils appropriately. The whole group broke up into five smaller groups with a teacher, mentor and observer in each group. They practised teaching using the methods described by Paul.

Lunch was eaten al fresco in the garden of the Heritage Centre and Tourist Information Office. Further discussions about bell handling continued! After lunch there was another theory session about how people learn and the different ways a teacher has to be able to adapt to the learner. The importance of changing unwanted actions and reinforcing correct actions was stressed. Communication and good feedback are important issues.

Up in the ringing room again there was more practice at raising and lowering and the use of nibbling up the rope. Paul showed part of a DVD produced by the ART on teaching bell handling. A final session in the ringing room was for the group to look at each other’s handling and try and spot the faults. All the participants were brave enough for this exercise! During the closing session Paul described what the next steps for teachers and mentors would be to work towards accreditation, the use of the ART Moodle learning environment available for ITTS delegates, and the Learning the Ropes scheme for new learners. He also suggested that the group might like to get together again in a few months. Participants were asked to complete a feedback form.

Thanks also go to Tony Freemont (Association Training Officer) for organising the day, the use of the bells and providing tea, coffee and biscuits during the day.

I found the Day Course very interesting and useful. The tutor and the mentors were all very patient and helpful, and found ingenious ways of simulating the problems which we will be faced with when teaching a beginner. One of my main concerns about teaching was how I would be able to regain control of the rope if something goes wrong, but with the help and guidance provided on the Day Course, I feel much more confident in my own abilities.

I would definitely recommend this Scheme to anyone who is considering teaching bell ringing for the first time. 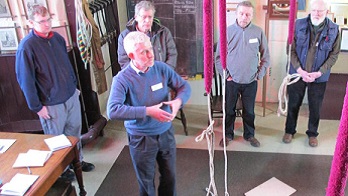