Dunham Massey in Altrincham, Cheshire, is a relatively new band that has chosen to focus on developing youngsters into ringers. We've been at it for about 20 months and we had a handful of youngsters that were ready to start dipping their toes into the murky pools of conducting. With none of us adults being uber-confident in this area I contacted Moira Johnson about the possibility of her running a Conducting workshop at our church. The existing conducting workshops consisted of half day modules so we decided to merge them together to create a full day.

The result was an intense and thorough introduction to the arcane lore of conducting, led by Moira who was supported by John Cater, who had rich seams of knowledge for us to mine. It was wonderful to have other ringers there as well - visitors from the Wirral and Carlisle motoring down to take part.

In the afternoon, Moira threw in an additional session on calling Grandsire. This brilliantly demystified this method and showed us just how simple it could be. She also pitched in ideas about how we could have more fun with Doubles methods by mixing in Antelope, Wollaton etc., and stirring it all up with different bobs - Grandsire bobs in Bob Doubles, Antelope Bobs in Grandsire - the world's your oyster.

The day concluded with a detailed exploration of coursing orders and how to use them in Bob Minor. Then some practice. And some debate about the benefits of coursing orders verses row transposition to keep a method right. What was excellent was the fact that no one way was correct and we all pitched in different experiences of how we made conducting work for us.

Huge thanks to Moira and John for delivering such a thorough and rewarding event. 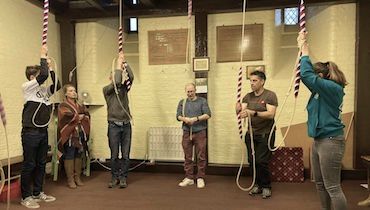