Course delegates attending the ART Bell Maintenance course back in May had travelled from across Sussex and Kent to attend the one-day event and we numbered 11 in total.

St. John The Baptist church in Kirdford, West Sussex, has a six-bell tower and a first-floor ringing chamber with an open balcony overlooking the congregation. Access to the bells is via a spiral staircase which is part wooden and part stone. Safety awareness is paramount when working in and around a bell chamber, especially so for a complete novice like me who is new to the surroundings. During the first classroom session on “Health & Safety”, and before anybody even thought about ascending the stairs to the bell chamber, many of the potential hazards and “do’s and dont’s” were presented.

The assembled group was just the right size to promote a good discussion on many of the points raised.

A second session introduced much of the terminology of the day – headstocks, clappers, gudgeons, bearings, hammers, twiddlers etc and then, after a quick cuppa, it was time for the first practical session of the day.

As a fairly recent newcomer to bell-ringing I’ve always been fascinated by the history and tradition recorded in the numerous plaques, certificates and photographs that cover the walls of many ringing chambers. So to have the opportunity to get up close and personal with the bells was especially interesting. Delegates were encouraged to check over the bell installations with a view to identifying any problems or irregularities, and then any observations or questions were reviewed and discussed as a group under the guidance of course presenter, Roger Booth.

All too soon it was time for lunch, so the group packed up and took the 15-minute drive over to Billingshurst, West Sussex ready for the second half of the course. The lunch break was rounded out with a rope splicing demonstration by Roger, followed by some hands-on practice for those who wanted to have a go.

The afternoon session kicked off with a short classroom session on compiling a maintenance schedule, and then the remainder of the afternoon was given over to visiting the second bell installation. St. Mary’s, Billingshurst has an eight-bell tower. The first-floor ringing chamber is accessible via a steep wooden staircase and from there entry to the bell chamber is gained using a vertical timber ladder fixed to one wall. Given the potentially dangerous climb all delegates were provided with a safety harness and fall-arrest equipment, so it took quite a while to get all of us up to the bell chamber.

At Kirdford we’d seen that all 6 bells were mounted in the same plane, which we were told is quite unusual. The bells of St.Mary’s are mounted four in one direction and the other four at right angles. This helps to limit the horizontal load on the frame during ringing.

The eight bells are mounted on metal headstocks unlike the six-bell installation, which has timber headstocks. Once again course delegates were encouraged to check over a bell or two and then any observations about each bell were discussed in turn as a group. Of course, a bell is a bell is a bell, but I found it very helpful to be able to contrast the two installations in terms of layout, accessibility and condition of the hardware.

The course ended with a short roundup and Q&A session over some very welcome tea and cakes. In the days following the course a number of very helpful handouts were circulated to course delegates by the ART team. These covered everything from issues identification and management, working at height, rope splicing, sound control and fire safety. The documents will serve not only as a useful reminder of the course content but also a handy reference tool for the future.

I’m sure that all those who attended would join me in thanking Roger for a thoroughly enjoyable and informative day out, which absolutely flew by. Thanks are due also to Vicky Chase, Tower Captain at Kirdford, and Kevin Quigley, Ringing Master at Billingshurst, for their excellent organisation and provision of refreshments and facilities during the day.

I would heartily recommend this course to anyone with even the slightest interest in what’s going on above their head when they ring a bell. I came to the course as a complete novice and it quickly became apparent that other delegates were more experienced. Nevertheless, I gained a lot from the day and have been left with an enthusiasm to learn more and improve my knowledge further still. 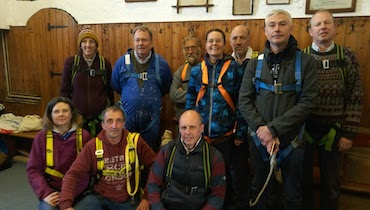 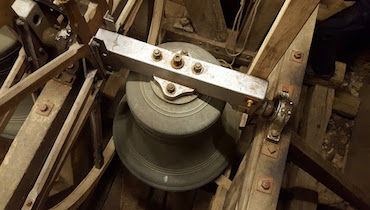 » What is a Bell Maintenance Workshop? 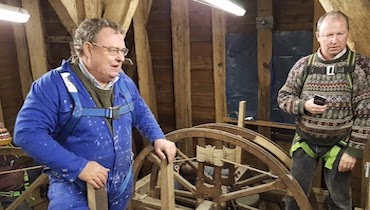 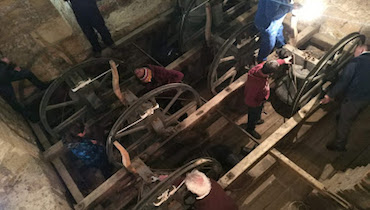