Stripping right back to basics, a practical session kicked off with a number of exciting exercises to not only get us listening, but giggling as well! Attempting coherent rounds whilst ringing on the opposite stroke to those either side of you proved particularly interesting, and ringing facing outwards made for some great photos! This, in addition to some theory-based listening exercises labelling various levels of inaccuracy, promoted much discussion and thought, and has certainly encouraged me to stop and listen more carefully to any bells I may hear when out and about … so watch out for my critical ear!

Solo simulator practise next encouraged some (very welcome!) constructive comments from peers as well as helpers, and the handy idea to film this meant we were able not only to receive advice, but watch our own ringing to visualise these corrections before having another attempt if we wished to: a particularly helpful approach for visual learners.

The informal final session of the day saw us attempting some enjoyable kaleidoscope ringing – even partially succeeding in the notorious Mexican Wave as we put our newfound listening and striking skills to the test!

As enjoyable and inspiring as this training event was, I’m sure I speak for all present when I say that this was due entirely to the unending knowledge and patience of not only leader Ruth Suggett, but also all those helping and attending in order to makes sure days like this run smoothly … particularly whoever ensured that it coincided beautifully with one of the finest cake sales I have ever laid eyes on, a true feast for hungry ringers!

Ruth proved to be an entertaining and capable Workshop Leader and six students and four helpers were put through their paces with a range of ringing exercises specifically designed to develop listening skills and improve their striking. One particularly entertaining exercise was the ‘handstroke hover’ where the ringers rang a couple of whole pulls, stopped and held the handstroke on balance until told to go again – a very good exercise in bell control as well! In the morning the bells were clamped and on the Simulator, the strike on the simulator precisely reflecting the odd struckness of the real clappers! (How do we know that? – ring the two together and adjust the simulator until you get a simultaneous strike!) The ringers were able to ring ‘open’ in the afternoon and the striking was noticeably better as a result of the training.

We are intending to hold further Workshops in 2018, please keep a look out for details on the Yahoo groups and the Association Website. 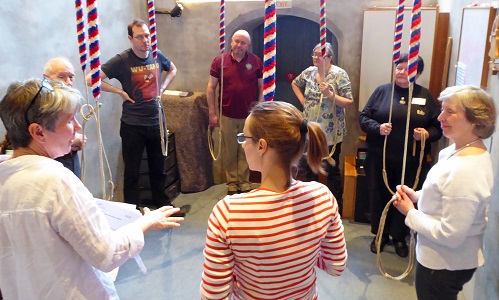 » What is a Listen and Strike Workshop?