Dumbbells allow you to practise on something other than a real bell. Most bell hangers can incorporate full size dumbbells into a design for a new bell frame or as a stand-alone installation. There are also a number of off-the-shelf systems that can be purchased for a more modest cost but which still have a realistic feel and can even be installed in your garage or loft!

This dumbbell and framework is fabricated from steel with a hot-dip galvanized finish. It is ideal for installation as an independent unit or can be hung from an existing bell frame or foundation beam. It is very robust and does not require a breakable stay. The stay and slider mechanism is simply a loop of rope which engages with a toggle and can simply be replaced if it becomes worn.

In addition to the standard design, wheel sizes and weights can be adjusted to coincide with existing bell installations if required. Graded sets can also be manufactured to simulate complete sets of bells or simulated augmentations.

Pluses and minuses of teaching handling on a dumbbell

For several years I have been teaching at Cleator Moor in Cumbria using a single tied bell with Abel simulator software, coaching individuals and small groups, in sessions open to anyone in the area who needed more rope time: usually for eliminating handling faults, for practice at managing coils, and for working on rhythm in covering and plain or treble bob hunting. I was more than convinced of the value of the equipment. Then, at Tulloch, I experienced a Matthew Higby dumbbell and was sold on it as the perfect teaching tool! I began to explore using it to help learners gain ropesight with the ringers on screen, before they were ringing methods, and found that it opened the way to ringing by place rather than by numbers. Slowing the speed down helped them see who rang first, last, then to see the order the bells rang in.

The Higby dumbbell has a large, blue, steel weight instead of a bell and is hung on a 4ft steel wheel, mounted on a steel frame; the whole assembly is about 14” wide. Altogether it weighs 2.5cwt but when rung it feels like a real bell of about 4cwt. It can be hung in a frame or from a beam, or bolted to the floor; it doesn’t have a breakable stay, just a loop of rope, which engages with a toggle to stand it. When Cleator Moor bells were removed following closure of the church, and St Bridget’s Church Moresby were chosen to receive a new light eight in exchange, it was logical that I offer to teach the new ringers there, it being only a couple of miles away from me. I decided to raise money for modern teaching aids by making mini bell ropes and designing a set of Christmas cards to sell. My first target was a Higby dumbbell, which was bought and installed at Moresby in November 2017, and in December I began with my first pupil. The rest started in January and by March I had ten learners who had learned on it, seven of whom were ready to ring with other people.

At this stage, all was positive – fast and effective learning, they all had a lovely style, and were making such fast progress they were quickly hooked. Seven were presented with their Level 1 Learning the Ropes certificates in church one Sunday morning, which created even more interest in the bells project amongst the parishioners.

Meanwhile, I was getting tired! Two-hour afternoon and evening sessions, 3-4 days a week at least, were dominating my life! But it was fun. Eventually the time came when most needed to ring with other ringers and on real bells, not least because ringing a bell up and down was an early part of the Learning the Ropes scheme and it is not easy to do it on a dumbbell, as it goes up and down so quickly.

So at the end of March I arranged a session at Arlecdon, and I asked for the help of other nearby ringing teachers to enable one-to-one work for several students at the same time. Arlecdon is a great tower for this, as it sits alone with no houses within half a mile, so a lot of jangling is no problem. Having expected little or no help, I also asked a few non-teaching friends to come along to ring rounds, and I was astonished and delighted when eleven ringers came along.

First of all, to get them used to the feel of real bells, I asked each teacher to begin with separate pulls with their learner and to give constant feedback. When they felt their pupil was ready, they went through the usual stage of letting them ring all backstrokes but catching the sally intermittently, the learner deciding who would catch each time, until they built up to ringing it alone. The disadvantages of dumbbell teaching became obvious now! Everyone got to ring several different bells that first night, and each ended up ringing rounds on four with three teachers ringing round the learner. But the target was to teach a complete band so that they could ring. Since then, we have had two practices a week at Arlecdon, and it was a major milestone when all of them could ring rounds on four bells by themselves. As the time came close to being able to ring their own bells, I was able to take them a few times to Wigton, an 8cwt millennium ring of eight, to bridge the gap between heavy ringing – 100-year old bells on plain bearings – and the modern easily-rung bells that they would be getting. Six of them can ring rounds together, at the time of writing, mostly keeping in order, and with some rows well-struck! The length of time they can keep them together before someone gets out of place is increasing! Three are able to lead.

‘Whole pull and stand’ on six works well; we are randomly choosing a number of whole pulls (up to five) to ring before standing. The real joy is seeing what lovely neat ringers they are, because they developed their style on the dumbbell, without being afraid of the tower bell.

I am totally sold on starting ringing like this and I have now begun to do the very early lessons in ringing on the dumbbell with two more from another local church. If that proves as successful, I will offer the use of it to other teachers in the area when they get new starters.

Advantages of learning on the dumbbell

Because the dumbbell has a rope mechanism for setting, not a breakable stay, I was able to take risks with the learners, letting them take full control of each stroke very early on. They put both strokes together very quickly, within three lessons for most, and in their first lesson for two. When first putting both strokes together, they rang to just below the balance and used one hand on the sally, transferring it correctly to the tail. Before putting two hands on the sally we used a dummy tail end whilst I did the backstrokes, making sure they caught low, with the left hand fully open, and then slowed it down slightly to the balance point. This was usually the second lesson.

There was plenty of bouncing and occasional missed catches when first putting both strokes together by themselves, but the lack of a breakable stay meant I could more or less leave them to it. They all experimented varying their pull until they knew exactly what happened if they overpulled, underpulled, caught the sally too early or late, or did not stretch up at back or pull the sally hard enough. By the third lesson everyone could ring steadily with few misses of the sally ... or bounces!

I got them each to bring the bell off the ‘stay’ a good 8-10”, without turning it fully over, then let it go back up again, slowing the rate of the bell’s movement until they could gently rest it back on the stay mechanism. The bell was hardly ever accidentally pulled off during this bit of learning. There is such a long feel of the bell just before setting, so they quickly learned to set it whenever I asked, and instantly and impressively to tower bells.

All very quickly learned to get the bell down safely by themselves. This is very easy on the dumbbell as it’s so quick that no coils are needed and they all made just one loop to stop the rope flapping.

Varied exercises are easy and quick

There was, of course, lots of stepping back to single pulls to work on technique; to help them feel what the right amount of pull on the sally felt like at backstroke when they were getting it wrong; returning to use of a dummy tail end; videoing to show developing faults and correct them quickly; etc. All these exercises are easy and quick on the dumbbell.

All started to ring rounds on four with Abel after just 5–6 lessons, each ringing the tenor. We started recording scores, each trying to beat their previous best!

We worked on changing speed: ringing it fast, ringing it slow, holding up backstrokes or handstrokes, as in dodging, and placemaking. All this can be done with a simulator ringing the other bells, too.

After a while, as each person became able to ring steadily with open handstrokes (which you need to do on any chosen bell, with a simulator), to get the bell down safely, and rescue themselves if it went out of control, including catching a lost tail end, I allowed them to go and practice on it without me, as long as there were at least two of them there. This gave them more rope-time. This is how safe the dumbbell is! No stay to break, no chance of being dragged up by the rope – catch the sally at the wrong time and the bell just comes down!

Disadvantages of learning on the dumbbell

They were very nervous for many sessions and this led to each of them stopping their pulls short, so as to be ready for the next action, and they kept ringing them down!

It didn’t take too long to adjust but it was a fault that continued and needed reminders for many weeks, and still does slip back in. At this stage, we used the dumbbell frequently, to refresh and refine their technique.

Ringing the bell up required what seemed to them an amazing amount of heavy pulling on the tail end, unlike the dumbbell, which goes up in just a few pulls. We needed to give constant reminders not to pull too hard when the bell was almost up, and still do at times.

Missing the sally occasionally, often after one of those massive hauls at backstroke, has led to several broken stays. Sometimes this was when the teacher with them wasn’t quick enough to grab it, and other times when we rang with only two or three helpers so that one or two of them had to ring without anyone standing with them.

One huge plus point was that each ringer was able to set their bell almost as and when asked, and each lowered it gently onto the stay. 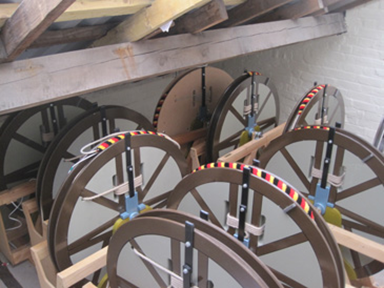 A ring of 10 Saxilby Dumb Bells at Exeter Cathedral School 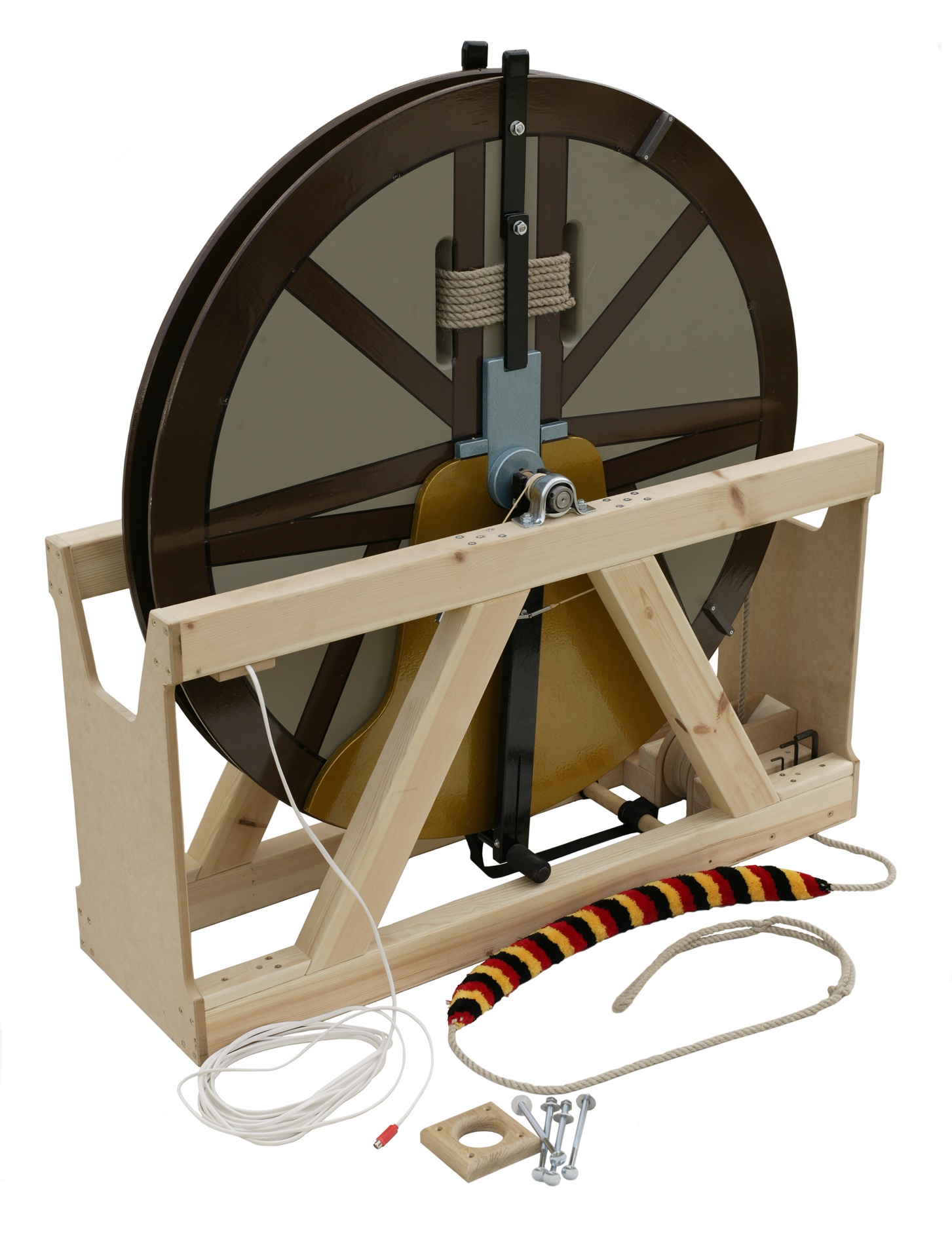