Benefits of using a simulator

Ringing on a simulator at this stage can be just as beneficial to the learner, accelerating learning and adding fun to practices, as it is for Levels 1 and 2.

Perhaps the easiest bell to hear in any ring or on the simulator is the tenor. As it stays in the same place in odd bell methods, ringers can practise developing listening skills by ringing the tenor to a Doubles method such as Grandsire or Plain Bob without needing to worry about changing speed.

I encouraged them to take turns when not ringing, to go on the treble, which was set up for use with the ringing simulator with a set of headphones, and practise their striking. The challenge was to cover to a 120 of Doubles and improve their scores, beating their own previous best, recording them on a nearby whiteboard. I trained a few youngsters as software managers to free me to help with the main ringing and they spent less time on their phones! At that time, we rarely rang the two trebles so it worked out fine. The ages of those who liked a go, ranged from 1 to over 80! And people loved recording their best scores, comparing them to their first-attempt scores, which were kept as a baseline.

You can set up any bell to sound as the tenor so ringers can learn to cover (improving their ropesight, rhythm and listening skills) off a bell they can easily handle – something they couldn't do without the simulator.

This is extraordinary! Neil ringing behind to Grandsire Cinques on the MRDC simulator. Anne ringing behind for the first time ever on 12. Obviously Neil had rung on 12 behind in the past quite a few time. Anne is a Ringing Remembers recruit. Such fun!

All simulator applications allow you to practise ringing Plain Hunt and Minimus methods on four bells with two bells covering. This may be a useful exercise before attempting Plain Hunt on five bells.

Having mastered the foundation skills, there are a number of simple exercises that can be practised in order to develop the skills needed to plain hunt the treble to methods. Bistow Little Bob Doubles allows the student to practise ringing the treble to Plain Hunt on two. It is similar to Kaleidoscope short places and involves the same pulls but each time the treble ringer will ring over a different bell, so it starts to introduce ropesight.

At this stage the applications offer a wide range of methods to practise which can be used to develop ropesight. The moving ringers feature helps with this, although some new ringers trained using a simulator will often have developed good listening skills and may rely more on listening than ropesight.

I watched a whole group of students model their speeds for plain hunt, on one experienced ringer ringing her bell at the correct times and talking through speeds and place. The students were aiming to fire their bells with her, as she did this. (She was on a mid-range bell to avoid extremes of visual gap.) Any number of tied bells can have their sound turned off on the simulator, so many can do this exercise at the same time.

Ringing up and down in peal

Practising ringing up and down in peal can sound really awful but the bell needs to be heard by the participants. A simulator takes away the worry associated with annoying the neighbours.

Practising ringing up and down in peal can be started in a group, with just one teacher and a student on each bell. The teacher rings a middle bell in the peal down, slowly and steadily. All the other ringers try to match the teacher's speed – either firing or ringing closely after the teacher. This is particularly useful when there is only one teacher and the rest of the band are new ringers. Alternativey this exercise can be used to get more students through the earlier stages of being able to control the raise or fall without having to take turns one at a time.

It is important that the teaching programme includes a balance of time with real ringers as well as time on a simulator. Real ringers will not strike as accurately, and although they will nod and wink, they will also go wrong! Nevertheless there are also things that can be done with a simulator that are less convenient to do with real bells. This includes: 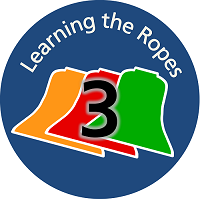 Competent at plain hunt and covering. Demonstrated by ringing two quarter peals at least one of which is on the treble.

Download these handy guides showing how to set up your simulator for each of the learning exercises on these LtR web pages.