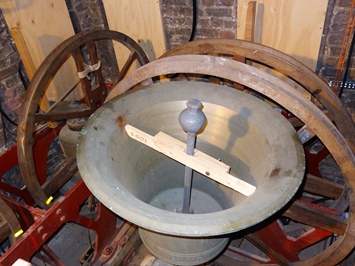 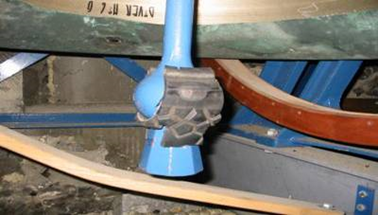 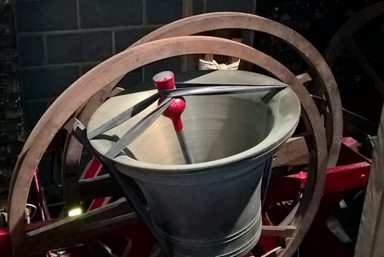 Hinged wooden clamps, secured to the bell with a wing nut locking mechanism, can clamp the clapper in the centre of the bell and are easy to make. These can sometimes work loose if not tightened properly and need to be tailored to fit the diameter of each bell. One disadvantage of clamping the clapper centrally is that it makes the bell lighter set on both strokes, as the weight of the clapper is not working so effectively at holding the bell on the stay.

An alternative method is to cut an old motor-cycle tyre into sections. Old tyres are easy to get hold of as garages need to dispose of them and they produce a heavily muffled sound on both strokes. Being fixed to the clapper means that they do not affect the set of the bell.

Bicycle inner tubes act as a large rubber band and can be used to hold the clapper centrally or to one side. They are relatively cheap and quick to fit and remove, the top end being looped over one of the nuts on the headstock. If the tube is too long, you can shorten it by tying a simple knot in the middle of the tube.

Reach under the bell and pull the loose end of rope fairly taut against the middle of the far side of the lip of the bell. Then tie a clove-hitch around the narrow part of the flight as shown. With practice you can make the knot and then slip it over the flight. Adjust if necessary so that the clapper is about in the middle of the bell and pull tight.

Bring the loose end of the rope to your side of the bell and pass the end through the loop that you made at the beginning. Pull the rope towards you very tightly. Secure it with two half hitches. Tuck in any loose rope securely.


» Setting up your simulator