People don't change. Whether fifty years ago or last year it's personal contact that gets people into the tower. So talking about ringing to a friend, work colleague, new neighbour or even a complete stranger will pay dividends.

Tell everyone you are a bell ringer, do not keep it secret, but likewise do not bore them rigid with a detailed description of Cambridge front-work. Be positive and friendly, tell them to come along and visit the practice if they want to see what’s involved, make them welcome. If they come to the practice, do not just leave them sitting on the bench watching, include them – get the handbells out, let them ring some call changes to understand how it works, talk to them, take them to the pub afterwards.

If you have enthusiastic new ringers who are enjoying learning to ring and are very keen in the initial stages, this is a great time to encourage them to bring a friend along. Encourage them to take photographs of themselves in the tower learning, then put it on their Facebook pages so their friends can see it, with the message that others are welcome to come along and try. Get them to “tell all their friends” – it does work!

Likewise your team members. I think we all get the occasional “magic recruiter” in the team, one of those gregarious, chatty people who works in a customer-facing role at work, like the Eaton Bray Butcher (see below!). They tell everyone about their ringing hobby and are enthusiastic – brilliant local PR.

What I’ve done is to “steal with pride”. I’ve used a few good posters BUT they haven’t brought any response! I found ” eyeballing” people and simply asking if they are interested works well but be prepared to be rejected. But at least people see we are there and the bells aren’t rung by machine.

Very occasionally if numbers are low I send out an email to the students encouraging them to recommend us to friends or other ringers at their home towers. I think the students themselves are probably the best recruiting sergeants.

It seems that success breeds success. During 2012 a further 60 people started learning to handle and 46 of them attended branch courses. Most of these came through personal recommendation both of the people who had taken up ringing in 2011 and the present ringers.

One of our ringers, a GP, found out about the bells because one of his patients who was learning to ring, went along to him complaining that he had hurt his shoulder due to practising his new hobby. Shortly afterwards, the GP joined our band. Another lapsed ringer happened to be walking past the church one day and heard the bells ringing, and came in to find out more. Another one went to a local wildlife spot to look at the ospreys, and there discovered an old friend of his, who is also a ringer, and who then told him about the bells.

We started ringing following a chance conversation I had with Trisha Hawkins, the bell ringing teacher at St Mary’s, Barnes. She had recently got back from a ringing trip and was recounting the details, and it all sounded very interesting. She then asked me if I would like to have a go, and I thought why not? I would try anything once! I asked if my children could come and watch, and they were invited to ring too, and so began our bell ringing adventure.

At Eaton Bray when the bells were re-hung, lots of people in the village heard them being rung regularly for the first time and of course, in a small village they all know each other, so it was something that created a buzz “Oh, they’re ringing again”. As a result, the bloke in the butcher’s shop start learning, and because he was a chatty person who spoke to everyone, he couldn’t stop talking about ringing and that got other people curious.

I personally recruited someone whilst going through the checkout at Tesco. It was a Sunday morning, after ringing – I was paying for shopping and I had my Bell Ringers’ team t-shirt on, the lady serving me said ‘Oooh, bell ringing, I’ve always fancied having a go at that, do you know of any courses that they are running locally?” Easiest recruitment initiative ever, I gave her some contact numbers hastily scribbled on the back of a receipt and I heard that she went along to learn at her nearest tower. So, the message is, wear your Bell Ringing Team t-shirt at all times! 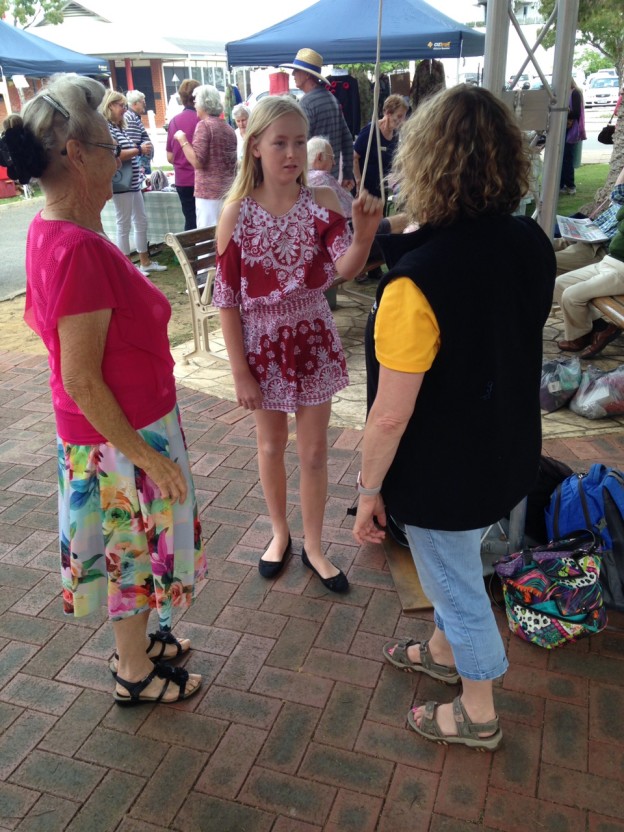 » Return to the recruitment and retention home page

» Return to read about other ideas for recruiting ringers